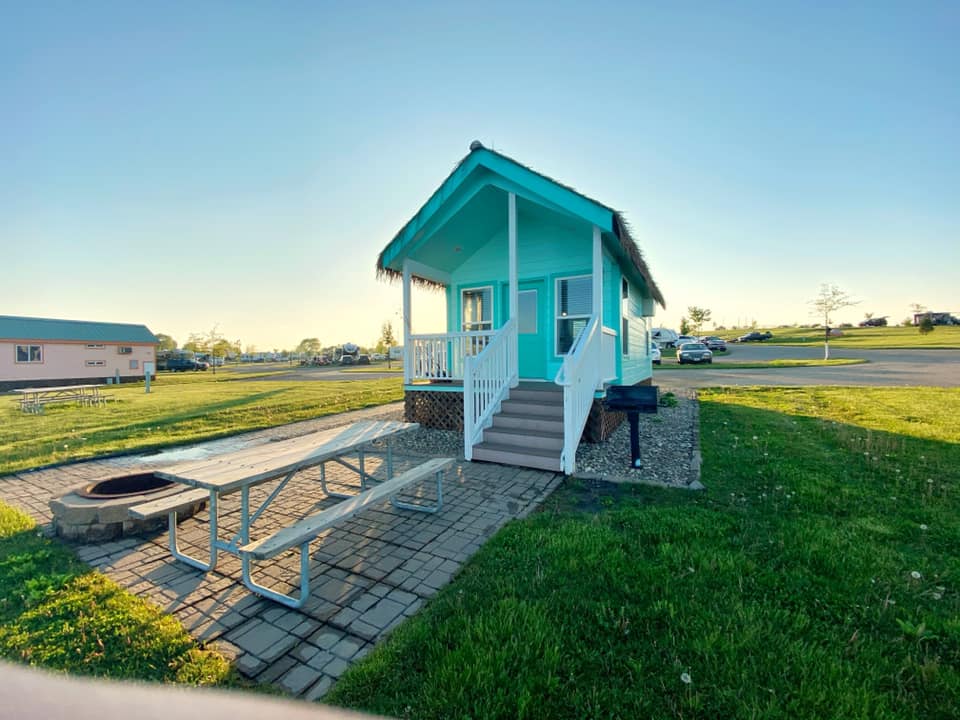 for months, we planned a camping trip to iowa with my family and some of our family friends. we were a little hesitant if it was going to even happen due the covid pandemic, but were thrilled once we got word from the campground that they would be opening back up, and just in time!

we spent the morning packing up and heading to iowa. it was a perfect drive a way; not too far, but close enough where you didn’t feel like you spent the whole day in the car.

we planned our visit at a KOA campground in waterloo, iowa. the town is a pretty decent size and they have a lot to do there like a casino and waterpark; however a majority of everything was still closed. the campground had a lot of great amenities too… a dog park, playground, and even a lake that you could fish on or rent some of their canoes.

my parents and our family friends all had campers, so we opted for renting a cabin at the campground we were staying at. i’ve never stayed at the KOA in waterloo, but was decently surprised with how adorable the rental cabins were. they had quite a few to choose from, but we opted for the 4-person cabin since there was only just the two of us.

my favorite thing about weekend getaways camping is how relaxing and non-stressful it is. just being able to sit outside, hang out with our friends and family, and enjoy the fresh air. and after being cooped up inside for the past few months, it was even more enjoyable.

all three nights that we were there we did some fishing around the lake. the fish were biting, and even though they were all on the small size and just catch and release, it was fun. the guys caught a fair amount, me on the other hand? one. and it doesn’t even really count because i told the guys that i wasn’t leaving without catching a fish and my father being the patient man he is when he is ready to go, he is ready to go. so he hooked one and let me real it in. so, there’s that. but thanks pops!

if you’re from the midwest, you know what “bags” is and you play it. often. and it’s an essential when camping. you gotta. so being the illinoains that we are, the bag sets were out and lots of lots of rounds were played.

the families that we went camping with were ones that we grew up with. people that we’ve known for many, many years and after growing up and having kids of my own, i don’t get to see them as often as i would love to. it was so nice to see them all again and reminisce about all the camping trips we took as kids and laugh at how old we all are now.

as always, our mini vacation went by way too fast. the weather wasn’t too bad while were there, the company was great, and just being able to get out of the house was something we all needed. i’m forever thankful that we get times like this and have the opportunity to do so. we’re already looking forward to the next one!